Located in the northwest of Greece, in the north of the Ionian Sea and in the entrance of the Adriatic Sea, Corfu (or Kerkira in Greek) is historically the main capital of the seven Ionian Islands and one of the most beautiful islands in Greece. Corfu’s population is approximately 112.000 and its municipality also includes the islands of Ereikousa, Othonoi and Mathraki.

According to mythology, the island’s name comes from Asopos’ and Metope’s daughter Korkira. Poseidon, the God of the sea, fell in love with Korkira and abducted her.

Poseidon and Korkira got married on the unnamed island and as a wedding gift to Korkira, he named the island after her.

Korkira and Poseidon had a child, whom they named Phaiax and this explains why Corfu is also called the island of the Phaeacians. Eventually, the name of the island was changed to Kerkira due to the Doric Greek Dialect.

The name Kerkira is only known to the Greeks. Foreigners call the island Corfu, which comes from the byzantine name “Coryfo” due to the two peaks, that can be seen from the visitors as they approach the island by the sea, in the entrance of the harbor.

One of the greenest islands in Greece, Corfu is famous for its flora and its countless olive trees.

Every year, hundreds of thousands of tourists visit the cosmopolitan island of Corfu in order to admire the island’s incredible beauty, exceptional architecture, cultural heritage and stunning sceneries.

Back in 1623, when Corfu was under the occupation of the Venetians, the latter funded the planting of new olive trees and today the island produces its own local olive oil.

Corfu offers a lot of attractions of great historical significance to its visitors and that makes sightseeing in Corfu even more interesting. Furthermore, the historical old center of the island has been listed as a UNESCO World Heritage Site since 2007.

The island’s coastline and unique beaches with the turquoise blue sea ensure the pleasure of even its most demanding visitors and promise a unique holiday experience.

It is said that the people make the place and so the Phaeacians are ready to demonstrate to you their hospitality, authenticity as well as their unique culture.

Due to the island’s rare beauty and ideal strategic location, Corfu has always attracted the interest of various different empires and that explains why the island has been under the rule of so many conquerors.

There are many worth visiting museums and archaeological sites and attractions in Corfu Greece, making it ideal for history and art lovers. Below we name some of the most prominent museums on Corfu Island.

Corfu has a wide range of places to explore.  It can meet the tastes of the most demanding visitor.  Below, there is a list of the most prominent sightseeings on Corfu Island we highly recommend you to visit.

It is widely known that Corfu is the best place to spend the Easter Holidays. The island is extremely crowded during that period of the year since there are a lot of festivities as well as traditions and customs that should not be missed. 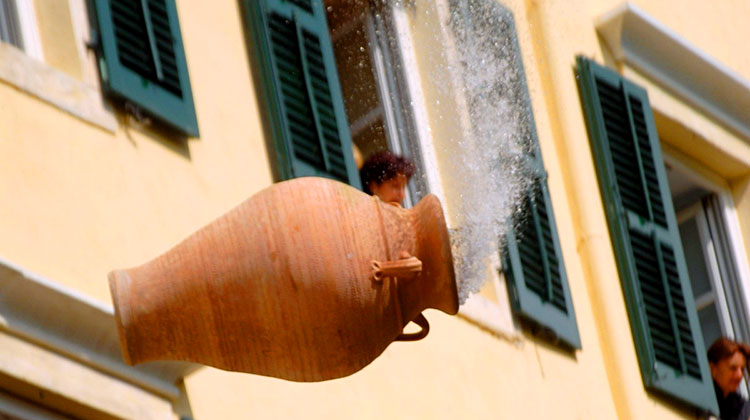 Corfiot Cuisine is considered to be neither too spicy, nor bland and the food can be described with one word – delightful. What makes the island’s cuisine so special is mostly the influence of the Venetian domination from the past that have left behind many recipes, changed the eating of the island’s inhabitants and created the traditions as we know them today.