Corfu Tourist Services is a destination management company which aims to provide high quality travel services to its clients. Established in 1961, C.T.S.  is one of the leading tourist agencies in Corfu, as well as a pioneer in the tourism industry.

With more than 55 years of experience, we have managed to overcome all the obstacles in our way and that demonstrates our love and dedication for what we do.  Focusing on the nexus of innovative thinking, hard work and ethical professionalism, we have found our recipe for success. A recipe that has already been passed down to the third generation.

Corfu Tourist Services is located in the suburb of Kanoni, very close to one of the main sightseeing spots of Corfu Island and 10 minutes distance from Corfu Town.  We would be delighted to offer you our assistance and make your vacations in Corfu an unforgettable experience.

In 1961, Corfu Tourist Services was established by Michalis Chalikiopoulos, a successful local businessman. Well liked and well known, he was a recognizable figure at the island’s bouzoukia and tavernas and much admired by a growing number of friends and clients from Europe and America, to all of whom he was an enthusiastic guide. Michalis has learned to appreciate the concept “ Filoxenia” from a very young age. In 1935, when Louisa Durrell arrived in Corfu with her children Gerald, Lawrence, Leslie and Margaret, it was Michalis’ father, the taxi driver Spiros “Americanos” Chalikiopoulos, who famously took the family under his protective wing.

Born in 1892, Spiros was raised in the suburb of Kanoni, just south of Corfu Town. In 1920, as it was becoming increasingly common for young Greeks, Spiros along with brothers, made the long journey to the United States, a country that offered them the opportunity for adventure, work and the means to send money back home to their family.

The brothers worked hard in a wide diversity of jobs, from Boston’s produce markets to the oil-fields of Alaska and sent the money back home, to Corfu. The brothers, except Yiannis who got married, returned to their native island in the early 1930’s, as America plunged into the Great Depression. Once home, Spiros, began the taxi driving career that led him, so fortuitously, into contact with the Durrell family.

In 1940, Spiros passed away due to pneumonia and his son Michalis had to support his family. From 1946 to 1949, during the Greek Civil War, Michalis functioned as a liaison officer for the British Army before starting his first business venture.
Evidently inheriting his family’s keen, industrious nature, Michalis’ investment was funded by the proceeds of the sale of the salvaged engine from Spiros’ iconic and much beloved Dodge taxi.

Unfortunately, the vehicle that had transported the Durrell Family, as well as countless other locals and visitors, was destroyed in the Luftwaffe bombing of Corfu during the Second World War. Astonishingly, the engine remained intact. 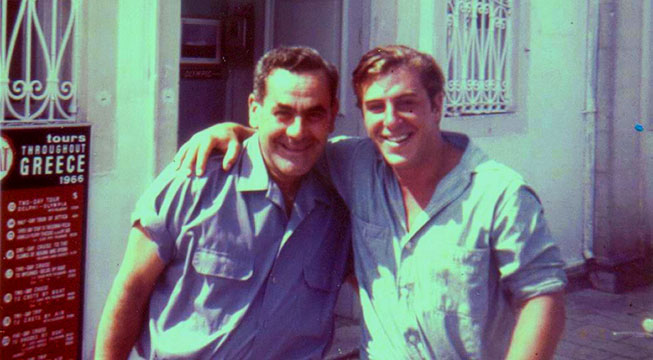 Michalis was a very ambitious and capable individual. He became the manager of the Xenia Hotel in Kanoni (today known as Corfu Holiday Palace), and then the manager of a busy port agent’s office which provided him with experience, international reputation and a substantial and loyal client base.

And so, trading as Corfu Tourist Services, he began his own business in 1961. Working with local hoteliers, restaurateurs, taverna owners and tour guides, Michalis built a network of contacts with European and American travel agencies and C.T.S became one of the first developers of international and domestic tourism in Corfu.

Serving a wide diversity of clients, C.T.S. dealt with huge numbers of tourists now flocking to Corfu as part of packaged tours, as well as independent travelers and an ever-growing roster of VIP clients, including Prince Michael of Kent.

Further recognition of Michalis’ reputation as the foremost tourist agent on Corfu came between 1965 and 1967, when C.T.S. was contracted by the United States Navy to arrange for the transport and entertainment of the Sixth Fleet, including the super carrier USS America, one of the largest aircraft carriers in the World.

C.T.S. was responsible for the onshore hospitality of the entire fleet, as well as arranging visits to the warships by invited locals. A massive undertaking, that was a commission that Michalis ensured to have been perfectly fulfilled.

Michalis’ son, Spiros Chalikiopoulos joined the company at an early age and in 1987, he took over as managing director of a flourishing family business. Throughout the next decade, under his stewardship, the company enjoyed continuing success and expanded its operations considerably, as Corfu’s tourist industry thrived.

In 1994, further exhibiting his family’s pioneering spirit, Spiros began to develop relations with tour operators in Eastern Europe and C.T.S. became the first Greek travel agency to arrange holidays for clients from the Czech Republic, Poland, Romania and Bulgaria. Furthermore, following the dissolution of the Soviet Union, Spiros recognized the vast potential for tourist business with Russia, Ukraine and the newly minted states within the CIS and began making inroads into these burgeoning markets.

Fifteen years later, with partners throughout the region, Corfu Tourist Services now arranges for more visitors to Corfu from Eastern Europe and the former Soviet Union, than any other local agency.

Originally based in offices in Corfu Town, in the area of Mouragia next to the port and overlooking Vido Island, 1997 witnessed Spiros relocating the company to Kanoni, to the same building that was the family home of his grandfather during the 1930’s; a fitting testimony to the spirit that defines the Chalikiopoulos family and a closing the circle on an enduring family tradition.

That's who we are