Saint Spyridon was born during the 4th century in Askeia, Cyprus. He was married, had a daughter, Irene and was working as a shepherd. When his wife died, he decided to dedicate his life to God and was chosen to become the bishop of Trimythous. He was known for his devotion to God, his love for the people, his simplicity and his humility. Most importantly though, he is known and respected in both the Western and Eastern churches for the variety of miracles that he performed, including resurrections of the deceased.

Saint Spyridon passed away peacefully on the 12th of December, 348 and this is the day that our church honors his memory.

His relics remained in Cyprus until the 7th century before they were moved in Constantinople. Right after the fall of the city, his Holy body along with Saint Theodora’s relics were moved once again from the Priest Georgios Kalohairetis and reached the island of Corfu.

Initially, the relics were placed in the temple of Saint Athanasios. Georgios’ son, Markos, inherited the relics of Saint Theodora and donated them to the Corfiot community in 1483.

Saint Spyridon’s relics were inherited by Georgios’ other sons, Loukas and Filippos. They wanted to move them but due to the objections of the Corfiots, they changed their mind and conveyed them to Filippos’ daughter Asimina. In 1520, she married Stamatello Voulgari and so until 1925, the relics belonged to the Voulgaris family. After several moves in between churches in order to be protected against the Turks, finally the relics were placed in Saint Spyridon’s church, which was inaugurated in 1589 and remain there until this day. 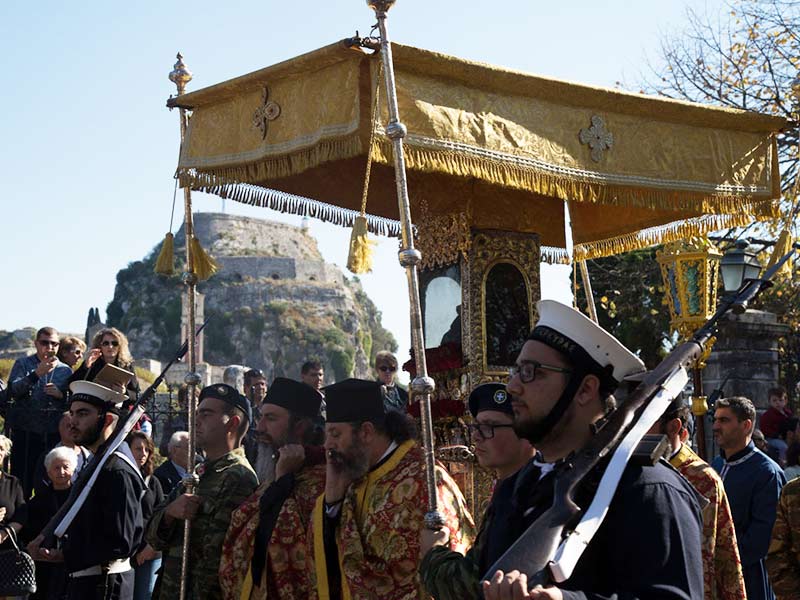 The Corfiots honor and worship Saint Spyridon and consider him the Keeper of the City. This explains why every family in Corfu has a member named after the Saint.